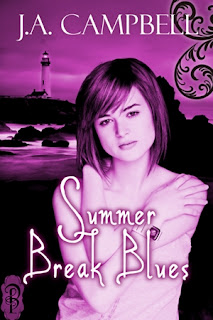 
Meg managed to survive her senior year of high school as a vampire, and now she’s looking forward to a relaxing summer with her friends before trying to tackle college. Unfortunately, some unfinished business from the previous year rears its ugly head. Meg is forced to deal with the Sidhe who are distinctly unhappy that she killed one of their kind last winter. Then Ann’s parents vanish while on their annual summer vacation in Maine and it’s up to Meg and the rest of the gang to come to the rescue. Though she is still trying to figure out who and what she has become, Meg feels she and her friends are up to the challenge. That is, until things really start to fall apart.


I ran, almost flew over the sand. Alexander’s sheer panic drove me to move faster than I ever had before. I didn’t have much time to take in the scene, but he struggled with someone. Not having a better idea, or time to plan, I tackled them. We all tumbled to the ground, and I managed to keep hold of his attacker long enough to get him away from Alexander. We rolled, and I tried to come up on top, but the stranger was strong and pinned me before we even stopped moving.
“Aww, and here I’d thought you brought me dinner.” I had a brief impression of black eyes and gleaming fangs before he grabbed my shoulders and lifted me up, then slammed me back into the sand.
Pain lanced through my head. I groaned and tried to fight back, but before I’d even formulated a plan, the assailant’s weight was gone. Alexander cried out again.
“Damn it, why do I have to keep saving you!” I jumped up and plowed into them again. This time I dug claws into his ribcage and jerked him away. I thought I had a good grip, but he twisted free. The smell of blood was overpowering. Some of it was Alexander’s, but much of it was my opponent’s. He backed up, still smiling at me. He didn’t look at all concerned I’d just buried claws into his ribcage. He wasn’t much taller than me, and his dark hair and almond eyes made me think he was Asian. But the fangs he bared were all Vampire.
Terror lanced through me, making me weak. I wanted to run. The fear I’d felt when I’d faced the Unseelie last winter was nothing compared to my fear now. Vampires were real monsters, and I was certain I was about to die.
“Well, you do have a little bite to you.” His smile wasn’t friendly.  He wasn’t much bigger than me, but he was a lot faster, and I lost sight of him until he stood right in front of me.
“But you’re young. And dumb. I told you to be more careful.”
I tried to block his next move, but he caught my arm and twisted me around, trapping me against his chest. I felt strangely exposed and panic turned my limbs,
and my brain, to jelly. I shrieked and tried to pull away.
The Vampire laughed.
“Meg!”
“Run! Get out of here!” I thought that’s what I said, but in my panicked state I could have been shouting the periodic table. I kicked backward, and my heel connected with the Vampire’s shin. His grip never loosened.
Duck!
I wasn’t sure if I actually heard the words or not, but they punched through my panicked fog, and I did the best I could. The Vampire still had hold of me so I twisted my face against his blood-covered chest.
Light flared and the Vampire screamed. I pulled away from him, small pinpricks of heat searing along my shoulder and back. He was still yelling as I ran away from him.

About the Author, J.A. Campbell:

Julie writes fantasy novels. When she’s not out riding her horse, she can usually be found sitting in front of her computer with a cat on her lap and her dog at her side.

"Summer Break Blues" is the second book in the 'Clanless Series'. J.A. Campbell pens her characters with true to life teen "problems" that just about anyone can relate to. I love the way her plot it written in a uniquely and original way, much different than other fantasy novels. A must read for all YA and adult alike.

I give "Summer Break Blues" a 5 star rating. 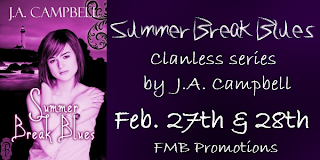