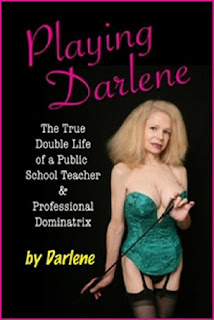 “Playing Darlene” lets the reader take a peek into the mysterious lives of professionals in the sex industry and some of the jaw-dropping encounters she had with the thousands of clients whose fantasies she helped come true. With everything from roleplaying a shopaholic wife being spanked by her husband to wrapping up a muscular cross-dressing client in plastic and watching him wiggle, Darlene helped men realize their most secret desires…while she wasn’t grading school papers on her breaks.

Darlene's true stories of balancing her two different personas are frequently shocking, at times hilarious, and occasionally touching, but at the heart of the story is a woman on a personal journey not only to reconcile with her past, but also to discover the full potential of her own sexuality.

Since I believe that there are no accidents in life, it’s not surprising that one day I happened to notice among the newspaper racks a paper that had scantily-clad young lady on the front page. Of course I took one to see what was inside it. It was full of ads for private dancing, massage, bachelor parties, escorts, lingerie shows, fantasies, fetishes, and things I’d never heard of. I wanted to somehow get involved in something, but I had no idea where to start. And these things were totally beyond anything I’d done in the past. I mean I had studied ballet and ballroom dancing, and acted in legitimate theater. Were the activities in this newspaper even legal? I couldn't risk getting arrested and losing my teaching credential.

I finally called a place of business that offered private, nude dancing. When I got there I saw it was a real business, not someone’s house. It had been there for many years, which proved to me that whatever was going on in there was legal and, therefore, safe for me to do. I was nervous all right, but curiosity won out. I went in and saw a handful of young ladies lounging around in various states of undress. I asked the slimy (too much grease in his hair, rumpled clothing, and he badly needed a bath) guy behind the desk what I had to know how to do in order to work there. He looked at me as if I were crazy. I still looked like a soccer mom. He said something like, “This isn't the place for you.” He was right. I don't know how to describe the “type” the girls were, but I wasn't it.

But I wanted very much to be that type. To play that type. I told the guy I was a dancer, looked great when dressed/undressed the way the girls were, and really wanted to try it. He sort of rolled his eyes, but finally told me to come in at noon the next day.

I showed up with my “costume” in a bag: a lacy bra, g-string, hot pants, and spike heels. I got dressed and positioned myself on one of the sofas in the lounge. When Mr. Slime saw me, I could tell from the look on his face that he was thinking this may work out after all.
He then explained the way things worked. Some guy would just walk in off the street, look around at the girls, and choose me. I was to take him to one of the rooms and pull the curtain across the doorway. (There were no doors). I could dance around and take off some or all of my clothes, but I wasn’t allowed to touch him. He could touch himself, and there was a bottle of oil provided for this. The first time I was selected, I felt a twinge of panic. I was used to performing dances that had been choreographed and well-rehearsed. No one had ever taught me how to do a striptease on purpose. Where was I supposed to look? Should I gaze into his eyes and smile? Should I pretend he isn’t there? Or should I flat-out stare at his dick and wait for the explosion?

I worked there for a couple of months. I’d go in at noon, work/dance until five, change clothes, and teach my ESL class in the evening. I got a kick out of it. Now and then, one of my students would ask me something like, “Teacher, what did you do today?” They wouldn't have believed me if I had told them.

I didn’t make much money with this dancing thing. There wasn't that much business. Most of the time I was just sitting around the lounge reading a magazine or talking to one of the ladies. What I preferred, though, was listening to them. They discussed other aspects of the sex industry that I knew nothing about.

Then one fateful day -- someone mentioned slaves, whips, chains, and dungeons. That sounded like some kind of theater (oh, good--acting again), and I wanted to know more about it. I heard the word “Castle”, but that was it. The conversation was interrupted, and I didn’t know where it was.

I went home that night and went through the phone book. There must have been dozens of businesses starting with the word “Castle”. The Castle Liquor Store, The Castle Nursery School, and even The Castle Laundromat. I started calling. And calling. I was on a mission. “Is this the place with the whips and chains?” I'd say over and over again. “Sorry, lady, you've got the wrong number,” was the usual response.

Finally, this place had to be in the phone book.

And it was. Finally a guy on the other end of the phone said in a slow drawl, “Yeah, we got that.”

I went right over.

About the Author, Darlene:

Darlene was born in Hollywood, California, and grew up in Pasadena, a quiet suburb near Los Angeles. She received a BA in German from California State University, Los Angeles. For several years she worked in television and film. Credits include General Hospital, Chicken Soup for the Soul, and the female lead in the film Monstrosity in which she played a spaced-out punk rocker. She even photo-doubled for Christian Bale in Empire of the Sun and Corey Feldman in Friday the 13th: A New Beginning (when they were 14 and 12 respectively). For the past 20 years, she has been a public school teacher in Los Angeles County. She currently lives in the San Fernando Valley, where she can be found indulging in her favorite hobby, ballroom and country-western dancing. Her next book is scheduled to be released in early 2013. You may also email her at darlene@chancespress.com.

I give "Playing Darlene" a 5 star rating.

Prize is 10 eBook copies of “Playing Darlene” (1 each to 10 winners). Contest is tour-wide and open internationally. Must be 18 years of age or older to enter. Ends Dec 28.