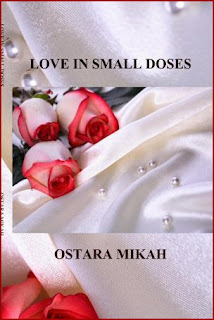 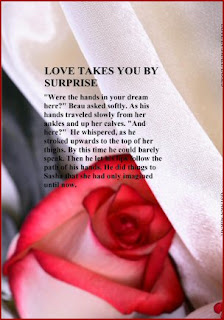 These are six stories of people who have given up on ever finding true love, only to find out that love was looking for them.

SASHA - A woman who was scared to love after a brutal high school attack.

CHARLIE - A man who was torn between his family's traditions and the one true love of his life.

These and four more stories of sensual pleasure, conflict and love that calls for the ultimate happily ever after.

When Sasha came back into the bar, they were silent for a moment, and then he said “Pixie don’t worry about that dream. You are still the toughest girl I know. I won’t say a word to anyone.” She breathed a sigh of relief and went over to him and hugged him. The hug was long and sweet. Beau stood there with her in his arms and was content. Her head barely reached his to his shoulder, this put all of her soft girly parts in line with his hard and manly parts. This made him want to hold her for as long as she needed. He kissed the top of her head. He held her tighter to try and calm the rising heat that he was feeling. She closed her eyes and enjoyed the feel of him against her. He was so handsome and sweet that she could not stop herself from having feelings for him. The image of his deep blue eyes and his lovely smile danced in her head. She knew at that moment that she wanted to kiss him. Then he said “Come on Pixie Girl lets finish this up so that we can go home and Lana won’t tan our hides.” When she did not move away from him right away, he paused. She stood there as if she were trying to make up her mind about something. Then she moved as close as she could to him and slowly reached up and touched his face. Beau watched her hand as if in slow motion. He was barely breathing as her soft hand made contact with his skin. The look in her eyes called out to him. As if they were asking him for the kiss. Her hand went from his cheek, to his lips, down his chin, to end at the nape of his neck. With her eyes never leaving his face she witnessed the growth of his passion for her. She saw the way his eyes closed as she caressed his cheek. The way his mouth opened slightly, as they kissed her fingers as they touched his lips. She heard when he stopped breathing as her hand reached his throat. His eyes widened as her lips drew closer to his. “Beau” was all he heard as he closed the gap between their lips and kissed her as gently as he could. As they kissed the electricity between them flowed. Her hand found the opening of his shirt and caressed his chest and collar bone softly. “Pixie was all he could say when the kiss ended leaving them both gasping for air. By the look in Beau’s face, Pixie knew that he had really enjoyed the kiss they shared.

About the Author, Ostara Mikah:

Ostara Mikah lives in New York with three of her four children. After reading romance novels since the age of fifteen, I finally decided to realize my life's dream and become a writer myself.I love to keep up the with the new trends in writing. I love to write about ordinary people finding their greatest loves in ordinary ways. This adds to the hope that there is a soul mate for everyone. You just have to look for them.

Purchase at The Book Patch