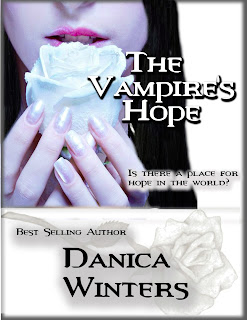 
Ellie Smith, an emotionally stunted dancer, finds more than she bargains for after her human life is taken by the vampire, Master Liam.  Once inside the Vampire’s underground lair, the Keres Den, she meets Ian, an immortal Viking warrior, who is infiltrating the soulless prison.  (New Paragraph) As Ellie begins her training, she learns that the dark tunnels around her are filled with even darker secrets.  As the truth of her existence come to light, she is faced with a choice—does she let her past dictate her future, or can she begin to feel again?

The couple in front of her stood under the bar’s lopsided mistletoe, their lips pressed against each other in a gesture of Christmas spirit.  On the man’s lapel was a white rose, smashed against the woman’s full breast.
The sight made Ellie Smith laugh.  Ellie was the same age as the two lip-locked party goers, yet they were so much younger.  They wore the white rose of hope—probably hope for love that would undoubtedly turn bad, or hope that the holidays would bring them the gifts of eternal bliss… those naïve fools.
The couple parted and their cheeks glowed with the pink twinges of arousal.  The sight was more than she could handle and she looked away.  They were luckier than they knew.  They probably did not have any idea what it was like to be without a bed for the night, without a home, without purpose, and without hope.
To her left a thick-set, redheaded man approached.  His shoulders were erect and he walked with a stride that conveyed power.  Catching Ellie’s eye, he smiled the grim smile of subtle manipulation.
Whatever he wanted, he wouldn’t get it from her.
A blonde man with an arched smile stepped out from behind the threatening redhead and sat down at the table.  “Hello, Elpis.  Welcome to The Ravena.”
The way he said her name made her skin crawl.
The blonde waved his hand at the rows of booze and the surly bartender.  “I hope you like the bar.”
The bar was like any number of others, just another stop in her constant travel through the dark world of the forgotten.
“Thanks.   I have no idea how you know my given name, but I’d rather you called me Ellie.”
“Sorry, Ellie.”
“Are you the owner of this place?”
The blonde motioned to the dangerous-looking redhead behind him.
She knew she should fear them, but there was nothing inside of her heart.  “I need a job.  Are you hiring?  I can dance.”
The blonde laughed. He looked over his shoulder at the red-headed man.  “She doesn’t have a clue.”
He turned back to her as if he had said nothing to the man who was clearly his boss. “My name is Ian.  And this is Master Liam…”  He pointed at the rigid redheaded man.
“What are you after?”
The club’s music filled the silence between them.
Ian smirked.  “Master Liam would like a dance.”
Ellie gazed over Ian’s blonde hair and his features—his eyes were the same blue as the sea, and his face was wide and rugged.  He looked like a portrait of a Viking.
Master Liam extended his hand in a silent command to dance.  She looked back at the handsome Viking.  Liam was a threat, but so was Ian.  Was it better to go after a powerful man who she wasn’t attracted to in hopes of getting a job, or was it better to forget her chance of getting hired and stay with the handsome Viking?
For once Ellie wondered what it was like to feel something—anything. If she was normal, would she blush? Would her lust move her nearer to him?  Instead, she only felt the dull emptiness inside of her breast.  Was there truly life without emotion?
Ellie slipped her hand into Master Liam’s. He led her to the dance floor, but she could sense Ian’s eyes upon her.
Master Liam moved in a stiff, archaic way and his hands never strayed from her waist.  Not that she minded.  It was nice not to be groped.  What kind of dancer would Ian be?
She looked back at her table.  Ian stared at her with a hunger in his eyes. She dropped her gaze.  If he wanted her, he didn’t act the part.
Master Liam said nothing to her as she looked up into his face.  His eyes were filled with lust and they slowly danced their way to the farthest recess of the dance floor.  His cold hands forced her head back and she stared up at the ceiling.
He pushed her against the wall.
He slowly bent down, taking each movement in his own unhurried time.  He inhaled and blew his chilled breath against the skin of her neck.
He wasn’t the man she wanted, but a job was a job—however she had to get it.
Liam leaned in, and instead of kissing her lips, he pressed his face into her neck and caressed her skin with his icy lips.
She drew in a breath and her pulse quickened.
His teeth pierced her skin, and she started to shriek, but his hand clamped down over her opening lips.  She struggled but as he drained her, weakness won.  A fire burned where his teeth dug into her flesh.  Acid filled her veins.
With her last thought, she envisioned the white rose on the stranger’s lapel.  No emotion, no hope…

About the Author, Danica Winters:

Danica Winters is an Amazon best-selling romance author based in Montana. She is known for writing award-winning books that grip readers with their ability to drive emotion through suspense and often a touch of magic. She is a member of Romance Writers of America, Montana Romance Writers, and Greater Seattle Romance Writers. She is a contributor to magazines, websites, and news organizations. She enjoys spending time with friends and family, the outdoors, and the bliss brought by the printed word.

Danica pens "The Vampire's Hope" a shor,t quick, original read in a smooth flowing plot just goes right into the action and doesn't stop. Her characters are creative and very well written. Full of mythology, this is one novella that you will not be disappointed in. Highly recommended for all vampire lovers.

I give "The Vampire's Hope" a 5 star rating.