"If Wishes Were Shadows" by A. Sangrey Black {Book Review} 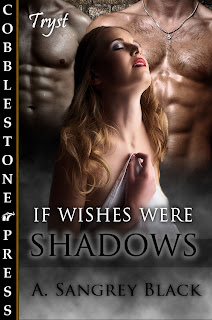 
Calinda Byer is all assertiveness in her daytime life, but when it comes to the bedroom, she leaves her will at the door with her clothes. Her vampire Dom, Adam Straton, refuses to turn her until she has witnessed the darker side of immortality and the true depths of his sexuality -- including his male vampire lover.  A weekend at his country estate promises dark, twisted delights the likes of which Calinda could never have imagined. All she has to do is use the safe word, and she can return to the "normal" world alone. But will she?

His kiss was a shock—gentle, sweet, beguiling rather than forceful. He teased her lips open with his tongue, probing within, making love to her mouth in a way that seemed foreign to the scene they were in. She lost herself and threw her arms around him, grinding her lace-bound breasts against his chest, her aching crotch against his erection. Just a little more…the kisses, his body, if he would just touch her, just show that small
mercy, it would be enough.

He pulled away abruptly, his expression shadowing once more, searing her with the red rage flashing in his eyes. He returned and began the kissing again, but roughly now, biting her lips, around her chin and jaw, tickling the fine hairs behind her ears and down her neck. Calinda was almost hyperventilating, her breath ragged then stopping entirely, her lungs frozen with the foreign sensation. Now and then he nicked little wounds in her flesh with his fangs, just a pinprick of pain, but the sensation of Adrastus licking and sucking away each one drove her ever closer to madness.

“Please, Adam, God, please!” she cried, arching her back toward him, reaching out to clutch at him, fighting to take control.

He stepped out of her reach. “Ah, now, you’ve failed me again, Calinda. I gave no permission to touch me. You must be punished.”
Before she had a chance to wonder what that meant, Adrastus hooked the tips of his fingers in the low neckline of her dress and tore downward with supernatural strength, ripping the thin cotton of the dress and the corset away, leaving her in nothing but the stiff lace of the panties. The chill of the room, her out-of-control arousal, and her lingering fear sent a frisson of goose bumps rioting over her entire body. She whimpered in helplessness and frustration, unable to force herself to stay either silent or still as commanded.

The exquisite punishment was worse than any pain her imagination could have conjured. He kept on nibbling, feasting on her, making tiny cuts over every inch of her body except any place where she so desperately wanted to be touched.

About the Author, A. Sangrey Black: 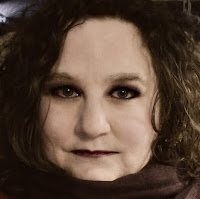 Alexia enjoys the darker side of entertainment, including literature from the classic gothic style to the modern horror novel, erotica and romance that walks in the shadows off the beaten path. She loves horror movies both psychological and gory, and nurses a fascination for and dedication to the rights and practices of alternative lifestyles. What two or more adults do in the privacy of their dungeon is her... rather THEIR business. Vampires are her great fictional (or are they?) love, but all things that hunt the night, human or otherwise, forever capture her imagination and demand that she tell their stories. A denizen of the Adirondack Mountains of New York, there are plenty of legends, ghost stories, and creepy happenings in the deep forests and abandoned caves to keep her writing for the rest of her life.

A. Sangrey Black also writes more mainstream paranormal romance and urban fantasy as H.A. Fowler. She loves to hear from readers of both styles, so feel free to drop her a line or visit her blog or Facebook.

Ms. Black pens "If Wishes Were Shadows in an exciting, creative well written plot. A fast paced story with very interesting characters that will hook you right in. This is the second book I've read from this author and she does know how to write a good story. Highly recommended for all mature adult readers and vampire lovers.

I give "If Wishes Were Shadows" a 5 star rating. 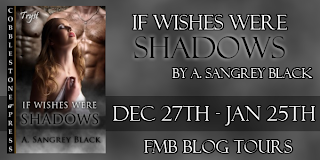