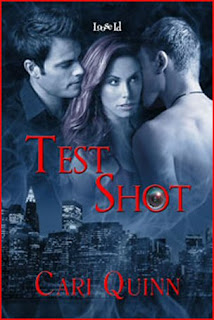 Aidan's a man on the edge, fighting demons he won't name in fear of losing the woman he loves forever. But the game he's playing can only continue for so long, especially when the man they decide to invite into their bed turns out to be Layla’s newest prospective model, Sawyer Blake.

Passion explodes between them, threatening to spill over and burn them all. Soon Aidan and Layla's already incendiary relationship hits the boiling point. Now she's fighting her own battles, including the conflicted feelings of lust and love she harbors for both men. But how can she figure out who to trust when everything she ever knew is changing, including herself?


“Like what you see?” Sawyer couldn’t help flexing a little for her. She was so pretty, and he wanted to impress her even if he knew this was a one-time thing. It didn’t matter. Right now, she belonged to him.

“You know I do. I love your body.” Layla fanned her hands over his chest, grazing his nipples with her pinkies. He stiffened at her purr of pleasure. “Sensitive here?”

She lowered her head to lap at one of them, then repeated the move on the other while she hooked one leg around his hip and massaged her heel into his back. Her wet pussy met his skin, leaving some of her arousal behind. First on his thigh. His belly. Finally on his cock. She eased back again, stirring up just enough air for him to feel every trail of her desire across his skin.

“I need you. Hurry.”
Sawyer did a backward crab walk to the basket of supplies and grabbed a couple of condoms. Bright pink and blue. Man. But they’d get the job done.

He tossed a quick glance at the sofa and noted Aidan sat almost as placidly as before, if not for the tight lines of strain carving his face. Without shame, Aidan drew his gaze down Sawyer’s body. His eyes didn’t fire with anything but mild interest, but the look alone caused Sawyer to turn away.

This was new territory for him, being observed while he was with a woman. That watching-being-hot thing apparently only applied while everyone was dressed, because if he thought too much about Aidan studying them—and likely getting aroused himself—Sawyer had a feeling he’d go as limp as overcooked broccoli.

He tore open the condom and unrolled it over his length, hoping Layla would give him time for a repeat performance. If he didn’t get inside her fast, his thoughts would win. And he wasn’t about to let that happen.

“Pink’s your color,” she teased when he threw the other condom on the coffee table.

“It’s yours too.” He drew the swollen lips of her pussy apart, visually drinking his fill of the arousal coating dusky rose flesh. Her clit stood proudly, begging for the press of a finger or the flat tip of his tongue. He’d do both before the night was over. “Look at that, all for me.”

“Yes.” She jerked her head, and he knew she’d glanced at Aidan. “All for you.”

He stroked her with two fingers. Up and down he rode her seam, finally pushing them into her sheath. Fuck. So tight. Inferno hot, even more so than before. Her muscles squeezed him as he started to move, testing them both with his deep glides.
Good goddamn, she turned him on. Enough to forget where he was. Even why he was. There was just the two of them, giving and taking pleasure.

Twisting his hand around, he gave her three fingers and used his thumb to toy with the button of distended nerves, each flick pushing her nearer to the point where she’d rain over him. He caught her gasps with his mouth and pushed into her harder. Knowing she could take it. That she yearned for him to shove her to the limit of her control. He could see all that, and more, in the glazed depths of her eyes.

Her orgasm approached with hurricane force. He could feel it gathering inside her, a vortex gaining speed. Drawing energy. He wanted her to break around him, a moment only they would share.

He pulled free, and she cried out. “Shh.” He quieted her with a kiss. “I’ll give you what you need.” He tweaked her nipples with his wet fingers, then licked off the juice he’d displaced.

She gripped his head in both hands, holding him while he tucked his nose into the curve underneath her breast and absorbed her scent as if it were air. Lovemaking had never before been this sweet—or this bitter.

“Sawyer, please.” She encircled his width and scorched him right through the condom. “Come into me.”

About the Author, Cari Quinn:

USA Today bestselling author Cari Quinn wrote her first story—a bible parable—in 2nd grade, much to the delight of the nuns at her Catholic school. Once she saw the warm reception that first tale garnered, she was hooked. She attempted her first romance in junior high, long before she'd ever read one. Writing what she knew always took a backseat to what she wanted to know, and that still holds true today.

Though she also fires up her computer as a graphic designer, proofreader and editor, she can’t resist the lure of disappearing into a world of her own creation. Now she gets to pen sexy romances for a living and routinely counts her lucky stars. The only thing she loves more than writing is hearing from readers!

* Disclosure of Material Connection: I am a member of CBLS Promotions and a copy of this book was provided to me by the author. Although payment may have been received by CBLS Promotions, no payment was received by me in exchange for this review. There was no obligation to write a positive review. All opinions expressed are entirely my own and may not necessarily agree with those of the author, publisher, publicist, or readers of this review. This disclosure is in accordance with the Federal Trade Commission's 16 CFR, Part 255, Guides Concerning Use of Endorsements and Testimonials in Advertising.