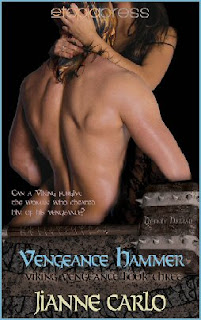 Can a Viking forgive the woman who cheated him of his vengeance?

All Dráddor has to do is kill the Earl of Caithness, wed the man’s daughter, and vengeance would be his and the oath to his father would be fulfilled. But when he arrives at Caithness, the earl is already dead, poisoned by own wife. And when he finds the earl’s daughter, the Lady Xára, he find she’s unable to speak. Unwilling to be thwarted, Dráddor marries her anyway to claim the earl’s lands and title, knowing King Kenneth could not fault him for later casting her aside.

Desperate to protect her family, Xára willingly weds the Viking. She must win Dráddor to her side before he discovers the secret that will destroy all. But the Saracen warrior, Niketas, has other plans. He needs the blood of two virgin half-immortals to win eternal life and the powers of the gods. Until the god Heimdallr, Xára’s true sire, makes it clear he has other plans for his beloved daughter…

Xára took the garment from Dráddør and spread the fine material next to his weapons. As always, the sight of his chiseled chest had her nipples tingling and her puss creaming. Heat stole across her face.
During the five nights, he had been gone, she had tried to pleasure herself, but had failed miserably. Even worse, guilt and shame had attacked her at odd times during her daily chores. How Nyssa and Skatha did such a thing in front of their husbands she would ne’er understand.
They had not swived since the night they had quarreled again about her immortal ability to see another’s memory five eves ago.
Xára longed to have his cock inside her and to feel that sweetest of invasions. But even more she yearned for the delicious intimacy after they both found their pleasure, the way he toyed with her hair and caressed her breast, the ease she felt with him then, and to simply talk to him of her day and hear about his.
All at once, she could not abide the deception inherent in what she had planned for the evening. Placing her palms flat on his chest, she tipped her head back, and met his gaze. “I fear I love you, Dráddør.”
He blinked and a wide grin stole across his face. “As a wife should. I approve of this, mit sváss.”
She ground her teeth and prayed for patience, could find no reply to his arrogant declaration, and instead untied his breech rope.
“Nay.” He smacked her hands away. “You sought to entice me with this siren’s garb and you have. I am at ready, wife. It has been a long, long, five days and nights and I have thought of naught but your titties and puss.”
Xára grinned. For with each sentence he spoke, Dráddør tore off a piece of clothing or a boot or hose, no longer the disciplined warrior who aligned his garb and weapons in a neat, methodical manner.
“Come.” He scooped her off her feet. Buried his nose at the side of her neck. “’Tis Valhalla holding you in my arms.”
“Nay, husband.” She pushed at his chest. “I have thought of naught but cleansing your flesh. Of lathering your cock and stones. This eve I do my wifely duty and bathe you.”
The blue in his eyes all but disappeared and his voice was thick and coarse when he said, “Aye. Aye.”
He slid her down his body, paused to grind his pecker against her mound, and then set her to standing. Dráddør stepped into the tub, sat, and dunked his head. Hot water splashed everywhere, including down the front of her chemise.
Xára laughed and knelt beside the wooden barrel. She soaped a linen square into a fine foamy lather, and began working on his neck and chest.
“’Twill ne’er work,” he growled and hauled her into the tub.
“Dráddør,” she squealed and smacked his shoulder. “I am all wet.”
“Are you?” He asked, and nibbled her lobe.

While strong heroines, exotic locations, and cultural differences are her forte, she goes weak in the knees for warriors and alphas. Send her a man with an attitude and she’ll find the right woman to tame him.

Jianne loves hot and spicy food, stomach-plunging park rides, and is kept on her toes by her Viking husband of thirty-five years, and three, handsome grown sons. There’s nothing she likes more than hearing from readers.


Prize is an eBook copy of Vengeance Hammer (Viking Vengeance, Book 3) from Jianne Carlo. Contest is tour-wide and ends May 29. Must be 18 years of age or older to enter.

* Disclosure of Material Connection: I am a member of CLBS Promotions. Although payment may have been received by CLBS Promotions, no payment was received by me in exchange for this publication. Sweet n' Sassi is not responsible for sponsor prize shipment.  This disclosure is in accordance with the Federal Trade Commission's 16 CFR, Part 255, Guides Concerning Use of Endorsements and Testimonials in Advertising.