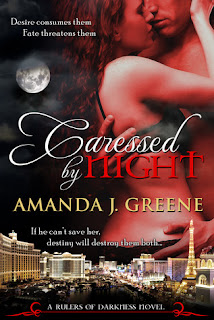 Dimitri Arsov, the last remaining pure vampire, was thought to be dead for the past four hundreds years. Now, he is back and has a score to settle with the traitor that had tried to kill him centuries ago. But as he waits for his prey to blindly step into his carefully laid trap, his overwhelming hunger for blood is triggered when he saves a beautiful art historian.

Kerstyn Ingmar’s life was normal and straight up boring until the night she is rescued by the dangerously sexy, powerfully mesmerizing, Dimitri. Unable to resist his diamond blue eyes and intense kisses, she is drawn into his world of darkness and closer to her impending doom.

While their desire consumes them, Dimitri is haunted by images of a bloody and deadly future. As his enemies draw near, he must find a way to save his mate from her destiny before fate destroys them both.

About the Author, Amanda J. Greene:

She lives in Southern California with her very supportive, military husband and their sweet cocker spaniel.

"Caressed by Night" is the second book in the 'Rulers of Darkness' series. In this book it picks up about 200 years after the first book left off with new characters being introduced. This is Dimitri's story as the last remaining pure blood vampire. As with Amanda's first and third book in the series, she just captivated me from the beginning with her vivid descriptions and the passion between the characters.

I give "Caressed by Night" a 5 star rating.

*Disclosure: I received the above product(s) from the Author in exchange for an honest review and in no way was I asked to give a positive review. I received no compensation for this publication. My opinions are my own and may differ from those of your own. This disclosure is in accordance with the Federal Trade Commission’s 16 CFR, Part 255, Guides Concerning the Use of Endorsements and Testimonials in Advertising.