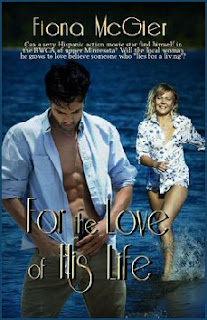 
Can a sexy Hispanic action movie star find himself in the BWCA of upper Minnesota? Will the local woman he grows to love believe someone who “lies for a living”?

When the famous action movie star Raul Roderick needs to “clean-up” for a major role that even he doubts he can deliver, the director sends him up to a resort owned by his grandmother in the Boundary Waters Canoe Area of upper Minnesota, to learn to commune with nature.  His guide is Veronica, the director's cousin, a tall, athletic woman who has the relaxed, sensible nature of someone who knows herself well.

Raul hasn't been this far from his reliable drug-dealers for a very long time, and dealing with real-life is something he's never been very good at. His initial clumsy attempt to seduce her makes her laugh...so he calls her fat. Is there any hope that their relationship will progress beyond its rocky start? And can Raul overcome his partying nature to discover what is really important in life?

Warning: This title is intended for readers over the age of 18 as it contains adult sexual situations (including a f/f/m ménage scene/scenes in the first chapter) and/or adult language, and may be considered offensive to some readers.


Raul tries to convince Veronica that he's fallen in love with her.

When they got back to the truck, Veronica hit the clicker before moving around to the back to toss her backpack into it.  Raul followed and did the same with the one he'd been carrying.  She pushed the back end of the truck back up and walked around to get into the drivers' seat.  Raul got into the passenger side and they both pulled their doors closed.  There was silence for a long moment.

"Come back to my cabin with me," Raul urged in what he hoped was a persuasive voice.

Veronica shook her head without looking at him.

Raul leaned over the console and put his hand over Veronica's hand that was gripping the steering wheel so tightly her knuckles were white.

"Then take me back to your place," he said in a low voice.  Her eyes widened as she turned to look at him and he added, "Please."

"Because I'm going crazy from how much I want you.  I've never made love to a woman before.  I need to know how we will feel together."

Veronica spat out a laugh that sounded more like a sob.

"If you're gonna lie to me, you'd better get more blood back into your brain first.  How can you expect me to believe you?  You've probably had sex with half of Hollywood, and fucked your way across the country by now."

"Yes, I have.  But I've never even bothered to learn the names of the women I've had.  What did it matter?  They were only after one thing, and so was I.  Once that was over, and they could brag about fucking Raul Roderick, our business was done."

He heard her intake of breath, staggered, like she was trying not to cry.

He reached his hand up and turned her face toward him.

"Look at me, Nica.  Look into my eyes so you can see I'm not lying to you.  I won't ever lie to you.  I've never had real feelings for any other woman before.  I don't even know how to seduce you.  I don't want to insult you with any of the moves I've used with so little thought before.  I don't want you to think this means nothing to me.  It means everything."

"Is this a new seduction strategy for you?  Are you just trying it out on me, to see if it will work?"  Her voice held layers of insecurity, and there were tears in her eyes, and that was too much for him to bear.

Raul sat back in his seat and folded his hands in his lap.

"No," he said in a flat, monotone voice.  "I don't know how to convince you that I'm not feeding you a line.  I'm not very good at speaking from my heart, because I don't know how.  I've never done it before.  But please drive us away from here, so we won't be seen by any inquiring minds who want to know what's going on."

Veronica sat and stared ahead of her for a minute before taking a deep breath.  She turned the key and started the truck and pulled carefully out of the parking lot.  She turned left and headed south on the Gunflint Trail, back towards all of the places they knew.

Raul tried hard not to give in to depression, but he could feel himself beginning to wallow in it.  As a child he had hated those feelings so much that he pretended they didn't exist...as if he was someone else.  That had always made his loneliness and pain easier to bear.  But now?

I don't know how to reach her.  Anything I say, she'll think is a line.  I'm in love for the first time in my life, and there's nothing I can do or say to convince her of that.  I'm an asshole and I don't deserve any better.

Raul stared down at the hands folded in his lap and felt self-hatred gnawing at his soul.


Fiona has always had stories in her head. Characters intrude into her thoughts and insist on showing her scenes from their lives. She discovered that when she ignores them, they start to yell louder; if she writes their stories and they can live in readers’ heads as well, they usually leave her alone. Only to be replaced by a new group of story-tellers. Her head is usually a very crowded place, but she likes it that way.


Prize is 5 $5 Dunkin Donut Gift Cards from Fiona McGier (1 each to 5 winners). Contest is tour-wide and ends May 20. Must be 18 years of age or older to enter.

* Disclosure of Material Connection: I am a member of CLBS Promotions. Although payment may have been received by CLBS Promotions, no payment was received by me in exchange for this publication. Sweet n' Sassi is not responsible for sponsor prize shipment.  This disclosure is in accordance with the Federal Trade Commission's 16 CFR, Part 255, Guides Concerning Use of Endorsements and Testimonials in Advertising.