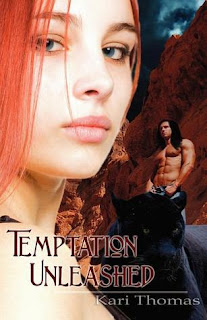 
Something wild this way comes. Once a powerful, practicing Wiccan, Kira Douglas has reluctantly moved to wild and beautiful Sedona, Arizona for only one reason-assume custody of her dead sister's daughter. She immediately runs into an obstacle. The child's uncle, the disturbingly sexy Aiden Calhoun, refuses to give her up. Aiden has good reason for not allowing Kira custody of his precious niece. The child is half witch, half shapeshifter. Allowing her to take the girl could expose the family's shapeshifting secret he has spent a lifetime protecting. Their instant attraction isn't just an inconvenient temptation. It could put his entire family in danger. But an evil force is re-emerging, bent on destroying everything they know and love. The only way to survive is to put all differences aside. And overcome the nightmare that once broke Kira's faith. This title has been revised and expanded from its previously published version. Warning: This book contains explicit, howling-under-the-desert-moon love scenes and some wash-your-mouth-out-with-soap language.

Sedona, Arizona, present day…
The night’s blackness cloaked the land, hiding those who didn’t wish to be seen—the various nocturnal animals and even humans who roamed the woods at night. Beyond the wide expanse of manicured lawn, the forest loomed expectantly. All that dwelt within its dark, protective interior embraced the stillness, waiting and watching. He would hunt again this night.
Naked, Aiden Calhoun walked through his back door and lifted his face to the sky, inhaling the crisp air. Varied scents rode on the slight breeze—forest creatures, including shape-shifters in their animal forms, the earth and the surrounding greenery. He felt the watchfulness of the animals, knew he was the cause of their tension, their wariness. For the past month, his relentless searches had disturbed the land and its occupants.
Frustration rippled off him in waves as he moved through the dark paths in the dead of night. His potent rage hovered just beneath the surface, a silent warning to any who would cross his path while he stalked his elusive prey.
His sleek, muscled body moved with supple grace as he walked onto the cool, crisp lawn. His six-foot form blurred as he broke into a lope, then a run. His speed increased until the moon’s luminous rays caught glints of black and nothing more. Thick, unruly waves of coal-black hair rippled over his shoulders, gleaming with blue-black tints in the faint glow of moonlight. Charcoal-gray eyes blazed with a cold fire that fueled his strength and speed. His sleek muscles and tall frame sinuously blended, shifting into a form just short of seven feet in length from flattened nose to long, winding tail. Large paws, equipped with razor-sharp retractable claws, replaced human hands. Toned arms and strong legs morphed into furred limbs that raced across the ground without missing a step.

THUS begins the deeply sensual love story of Aiden and Kira. Rival enemies that find resisting their temptation of one another is just too much to deny. I loved these two characters right from the start. I always create my hero and heroine before I even begin to think of a story for them. They’ll pop into my head and stay there until I tell their story. With these two it was a love project that lasted almost a year and a half. Because no matter how hard I tried, I just couldn’t get their story right. I’d be knee-deep into the process, chapters completed, and suddenly realize that Kira and Aiden weren’t talking to me ---once again--- because I wasn’t telling the right story. Groan! It took me five frustrating drafts (two of them complete!) before I finally listened to these two and told the love story they wanted readers to know. And what a sensual love story it is! Aiden is everything the Alpha male represents. Kira is every heroine that has the inner strength she needs to battle not only her own demons, but also those of the man she loves.

To celebrate my long-running Best Seller, Temptation Unleashed, I’m giving away a Swag package of fun items to one lucky winner. Please leave a comment and your email address to be entered. Thanks, and HAPPY READING! 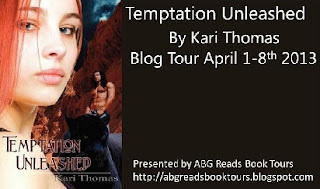 * Disclosure of Material Connection: I am a member of ABG Reads Book Tours and a copy of this book was provided to me by the author. Although payment may have been received by ABG Reads Book Tours, no payment was received by me in exchange for this review. There was no obligation to write a positive review. All opinions expressed are entirely my own and may not necessarily agree with those of the author, publisher, publicist, or readers of this review. This disclosure is in accordance with the Federal Trade Commission's 16 CFR, Part 255, Guides Concerning Use of Endorsements and Testimonials in Advertising.