When Christy Inemi-Spiff discovers that the man she vowed to love and honor has no such feelings for her, she is determined to cut her losses and move on with her life. A quick, quiet divorce is all she wishes….

However, Joshua has other ideas. He’s not ready to walk away yet, especially when he doesn’t understand why Christy wants out of their marriage. So he demands she agree to spend a quiet Christmas on a remote African Island with him, hoping they can salvage their relationship. If she still wants a divorce after these two weeks, he will let her go. But not before he’s had his fill of her.

But with the sparking tension between them, and the secrets behind the disintegration of their marriage threatening to explode, will either of them get their wish? Or will this season of good will show them what really lies at the bottom of their hearts?


“Why are you doing this?” she challenged. Her emotions rolled, making her feel unbalanced. It had been a long three months. And it seemed like today was only going to get worse.
“Christy, you know the reason. If you stopped long enough and thought about it hard, in your heart, you’ll know.”
“You can stop this.” She struggled to contain her anger. “You started this; you can end it.”
“I know, but I won’t.”
“You, you—” Enraged, she lifted a hand to slap him.
Joshua caught her hand midair, held it tight. Before she could react, he pushed her back against the wall, pinning her to it with his rigid body. Christy felt every bit of him, his strength, and his physical nature that he never bothered to hide.
“I think I have the perfect answer for all your bottled-up rage,” he said as he parted her thighs with his leg.
“Move,” she ordered, her throat dry and croaky, betraying her increasing apprehension.
Joshua had it easy. He was a man at home with his masculinity. She had never been able to resist him. He could have any woman he wanted. Sometimes, she wondered if he had, especially during their separation. She shouldn’t care if he’d been with anyone else. After all, her goal was a divorce. Still, she couldn’t suppress the intensity of her feelings. Perhaps her anger and hatred drove the concentration of her emotions.
“We have to get a few things sorted out first,” he replied.
He moved closer, his body flush against hers; his chest crushed her breasts, his thighs pressed against hers. Though she wore cotton trousers and a tank top, all of him stroked her.
“What are you doing?” she asked as she pushed against him.
He didn’t budge. “Just trying to relieve some of your frustration. That’s what all your aggression has been about, isn’t it?”
“Rubbish!”
“Such vehement denial, when the evidence is so obvious.”
Her face stung with revealing heat as warm blood rose in her body. Mortified, she tried to move to shake him off, but only managed to get her body even more entangled with his.
Her breathing came in short snatches. She became more aware of Joshua, his hardness and heat.
“I hate you.” Her voice sounded strangled. Blistering white rage swept through her.
“You lie, sweetheart.”
He lowered his head, trailing his lips against her cheeks in a tormenting caress.
“You love me.”

Kiru Taye writes historical, contemporary and paranormal romances. Her stories are sensual and steamy, her characters passionate and sassy and her settings atmospheric and exotic. When she’s not writing, she’s reading, hanging out with family/friends or travelling. Born in Nigeria, she currently lives in the UK with husband and two children. 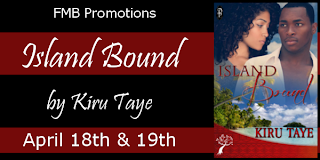 * Disclosure of Material Connection: I am a member of Full Moon Bites Blog Tours. Although payment may have been received by Full Moon Bites Blog Tours, no payment was received by me in exchange for this publication. This disclosure is in accordance with the Federal Trade Commission's 16 CFR, Part 255, Guides Concerning Use of Endorsements and Testimonials in Advertising.