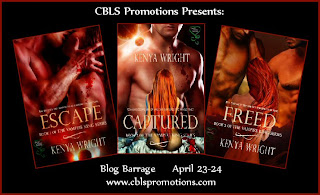 About the Author, Kenya Wright: 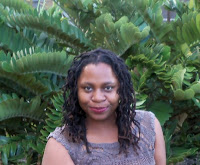 Kenya Wright always knew she would be famous since the ripe old age of six when she sang the Michael Jackson thriller song in her bathroom mirror. She has tried her hand at many things from enlisting in the Navy for six years as a Persian-Farsi linguist to being a nude model at an art university.

However, writing has been the only constant love in her life.

So here we are, Kenya published three books in the Santeria Habitat series (Caged View, Fire Baptized, and The Burning Bush). She also just signed a three book deal with Secret Cravings publishing for the Vampire King series.

Will she succeed in writing? Of course.

For she has been coined The Urban Fantasy Queen, the Super Iconic Writer of this Age, The Lyrical Genius of Our Generation. Granted, these are all terms coined by her, within the private walls of her bathroom as she still sings the Michael Jackson thriller song. 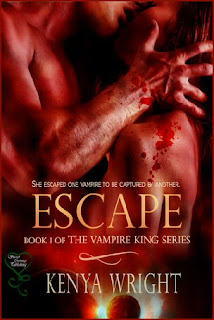 A domina’s only purpose in life was to birth vampire children for the Quiet King. Any human woman with the domina gene spent their lives in the castle under strict rules and the guards’ watchful eyes. Brie has been a domina for two years. After witnessing the slaughter of babies, she plans to escape and seeks help from Samuel, a vampire known for aiding many out of slavery.

However, Samuel has only one policy. He won’t help dominas escape the king. The penalty is too high and their blood triggers powers in him that he doesn’t want released. So Brie is forced to lie about being a domina and Samuel is lured in by her blood. Something emerges within them that they can’t deny, overwhelming their every cell and igniting an all-consuming hunger that neither can flee.

Warning: This title is intended for readers over the age of 18 as it contains adult sexual situations and/or adult language, and may be considered offensive to some readers.


Kenya pens "Escape", the first book in 'The Vampire King Series', with a very well written paranormal romance story line with illustrations that were a really nice touch and totally different than normal. She portrays her vampires well and they were well developed and fantastically sexy..well most of them where. A nice quick read, about 125 pages that will keep you captivated and turning the pages. I look forward to "Captured", the second in the series. I highly recommend this to be on all paranormal romance and vampire fans TBR list. 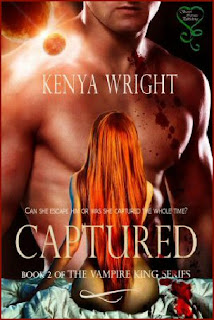 Brie and Samuel travel to the human town of Freemont and learn that Brie is being hunted. Brie is more than a domina. But what is she? And why is she being hunted as if she is the solution to a puzzle that the Quiet King has never been able to solve?

Samuel and Brie are forced to align with another, one that holds many answers and incites even more questions. Their journey drags them back to Capitol City and among the night life where sex and secrets mingle together within the light of the two moons. All this time Brie thought she’d escaped and gotten away free from vampires. But can she run away anymore or was she captured the whole time?

Warning: This title is intended for readers over the age of 18 as it contains explicit sex scenes and/or situations (including voyeurism) and adult language, and may be considered offensive to some readers.

Wow....I didn't think this series could get any better but it does! Kenya totally outdoes herself in "Captured", the second book in 'The Vampire King Series' with her strong characters and vivid imagination. The book picks right up where the first book ended and adds a few new twists and turns into the story line. Now I can't wait and see what happens in book three of the series "Freed" which is coming soon, but not soon enough for me.

I give "Captured" a 5 star rating. 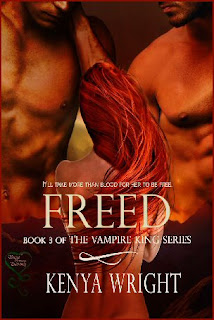 Blood paints the Quiet King’s castle. People flee the city. War will come. The only question is where and who will be on each side?

Brie, Samuel, and Ian return for the final installment of the Vampire King trilogy where all mysterious are solved and further secrets revealed.

Warning: This title is intended for readers over the age of 18 as it contains explicit sex scenes and/or situations (including m/f/m ménage and voyeurism) and adult language, and may be considered offensive to some readers.


* Disclosure of Material Connection: I am a member of CLBS Promotions and a copy of this book was provided to me by the author. Although payment may have been received by CLBS Promotions, no payment was received by me in exchange for this review. There was no obligation to write a positive review. All opinions expressed are entirely my own and may not necessarily agree with those of the author, publisher, publicist, or readers of this review. Sweet n' Sassi is not responsible for sponsor prize shipment.  This disclosure is in accordance with the Federal Trade Commission's 16 CFR, Part 255, Guides Concerning Use of Endorsements and Testimonials in Advertising.