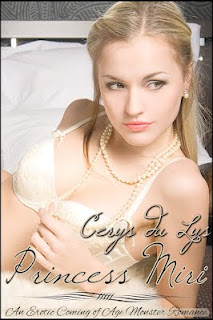 
Princess Miri is a bitch and the heir to the throne and she might have accidentally fallen in love with
a monster. It's common knowledge that everyone hates Miri, which is why it surprises her when her rival gives her a pet troll servant for her eighteenth birthday. Thump, as Miri names the husky monster, will do everything she asks. Or that's what she thinks.

When her demands lead to experimentation and sexual teasing, Miri realizes this isn't quite the case. One disobeyed order ends with a bang, literally, and her and Thump in an unclothed, carnal mess atop her nowbroken bed.

A troll coupling with a human? Disgusting!

She should be furious! Irate! And maybe she is, but she's curious, too...

She never thought she could open up to anyone before, always believed she needed to act harsh and stern in order to ascend to the throne. Unfortunately for Miri, while she discreetly explores her taboo sexuality with Thump, someone's plotting to exploit her shameful secret and ruin the Princess's reputation...

This book is intended for mature audiences.


About the Author, Cerys du Lys:

She lives in the Greater Boston area in a small town in New Hampshire. She spends her days writing, reading, learning, and working. And maybe sometimes she flirts with the mailman. Some of her most favorite activities involve understanding and learning about emotions and relationships.

She prefers romance settings, with the occasional monster or fairytale. Her secret kinks include reluctance, interesting paranormal creatures, romance(even with monsters), and fun. She loves writing about all of these things, though very strongly acknowledges that fantasies are fiction and nothing more.


Learn more about Cerys and her books on:
Website
Email
Goodreads

WOW....Cerys pens "Princess Miri" in a plot that was STEAMING HOT!  I found the plot to run something like 'The Beauty and the Beast' but in an well written, extremely kinky plot. The characters descriptions were well done and well rounded. Just a bit to hot for me, but with plenty of sex scenes, this book will keep you turning the pages.

I give "Princess Miri" a 4 star rating.

* Disclosure of Material Connection: I am a member of Reading Addiction Blog Tours and a copy of this book was provided to me by the author. Although payment may have been received by Reading Addiction Blog Tours, no payment was received by me in exchange for this review. There was no obligation to write a positive review. All opinions expressed are entirely my own and may not necessarily agree with those of the author, publisher, publicist, or readers of this review. Sweet n' Sassi is not responsible for sponsor prize shipment. This disclosure is in accordance with the Federal Trade Commission's 16 CFR, Part 255, Guides Concerning Use of Endorsements and Testimonials in Advertising.