* Disclosure of Material Connection: I am a member of Reading Addiction Blog Tours and a copy of this book was provided to me by the author. Although payment may have been received by Reading Addiction Blog Tours, no payment was received by me in exchange for this review. There was no obligation to write a positive review. All opinions expressed are entirely my own and may not necessarily agree with those of the author, publisher, publicist, or readers of this review. This disclosure is in accordance with the Federal Trade Commission's 16 CFR, Part 255, Guides Concerning Use of Endorsements and Testimonials in Advertising. 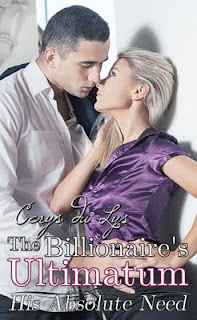 
Falling in love wasn't part of Jessika's temporary job description. Nor, initially, was being asked by billionaire CEO Asher Landseer to become an egg donor and surrogate for his infertile wife. All Jessika wants to do is help, but is she setting herself up for heartbreak in the process?

Screwing up on her first day of a one-day job is the last thing Jessika Fevrier wanted to do. Worse yet, she's managed to infuriate Asher Landseer, the young, handsome, reclusive and eccentric billionaire CEO of Landseer Enterprises. His idea of work performance punishment is unorthodox to say the least, but Jessika finds herself intrigued by this singularly unaffected man nonetheless.

She was only supposed to clean Asher's office, but before she leaves for the day he has another job he'd like to offer her. Revealing that his wife is infertile, Asher asks her to consider becoming an egg donor for his family. He's always wanted children of his own, but the fates have plotted against him, it seems.

Asher's marriage is of necessity, rough and possibly loveless, but his desire for children is genuine and real. His absoluteness and certainty in himself and his surroundings, despite everything, captivates her. Jessika finds herself charmed by this dominant, enigmatic man who seems to know everything about business and nothing about love.

Behind the scenes, there's more than the fates plotting against him. Someone has it out for Landseer Enterprises, and they're going to do everything within their power to cause Asher's downfall. Between dealing with Asher's conditions and requirements, the cruel gaze of his spiteful wife, and corporate sabotage, Jessika finds herself lost in a world completely different from the one she's used to.

Can she rediscover herself and come to terms with her impossible feelings for a man she can't have? Or in her attempts to satisfy His Absolute Need will she inadvertently become the catalyst that leads to his (and her) ruin?

Dominant, sexy, and powerful. This tantalizing story of love, lust, intrigue and suspense will bind you, entwine you, and thrill you until the very end.

This book is intended for mature audiences.


About the Author, Cerys du Lys:

She lives in the Greater Boston area in a small town in New Hampshire. She spends her days writing, reading, learning, and working. And maybe sometimes she flirts with the mailman. Some of her most favorite activities involve understanding and learning about emotions and relationships.

She prefers romance settings, with the occasional monster or fairytale. Her secret kinks include reluctance, interesting paranormal creatures, romance(even with monsters), and fun. She loves writing about all of these things, though very strongly acknowledges that fantasies are fiction and nothing more.


Learn more about Cerys and her books on:
Website
Goodreads

Cerys du Lys pens "The Billionaire's Ultimatum" in a well written plot filled with emotions and sexual tension. The author's main male character was very dominant but he starts to loosen up towards the end and had great chemistry with his female counterpart. I totally enjoyed the story line but I must warn you that in the story line, the characters have an extra-marital affair which some might find offensive. A must read for all erotica fans.

I give "The Billionaire's Ultimatum" a 4 star rating.