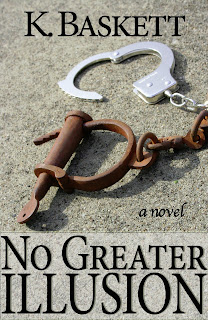 
In the very near future, surging advancements in technology have afforded American citizens with a number of conveniences. Of these, most notable is the SmartTag, a microchip embedded under the skin between index finger and thumb, housing all manner of personal information such as bank account details, medical history, voter registration and more.

This tightly-woven tale follows the lives of several very different people – Tealia, a free-spirited and intelligent photographer battling with conflicting emotions for her ex-lover; Mercer & Viera Scott, a power couple barely holding on to their marriage as the priorities of success and parenthood slowly become skewed between them; impoverished single mother, Naria, content with her reliance on both her current lover and government assistance to make ends meet; and the Holton family, wealthy beyond measure, enjoying carefree days of privilege and luxury.

Their status quo, however, is about to be undermined as America reacts violently to the brutal assassination of a highly esteemed female presidential nominee on the evening of the debates. As the entire nation struggles to make sense of the ensuing chaos, fear and distrust ramp up to dizzying heights. The end result is a series of grave consequences that will drastically alter life as they know it, making them all wonder how much of their world is but an illusion.

A captivating story that is at once gripping and dark, this brilliantly painted picture of a dystopian America cautions against the power of technology and the folly of taking anything for granted. Haunting and lyrical, No Greater Illusion is an astounding debut novel with a powerful message that lingers long after the final page is read.


About the Author, K. Baskett:

Jack of all trades, master of none - save for the art of procrastination - K. Baskett lives by the motto, ""Never do today what can be put off until tomorrow."" K. firmly believes that you aren't really interested in the author's hometown, spouse, children or pets, and has therefore decided to spare you the details. No Greater Illusion is the author's debut novel.


"No Greater Illusion" is a well written, captivating debut novel by K. Baskett, filled with emotions. The characters I found to be very well developed in this mystery thriller and had a hard time putting the book down. I look forward to the sequel and recommend this book to all mystery, thriller and suspense fans.

I give "No Great Illusion" a 5 star rating. 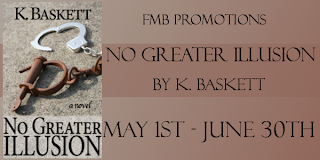 * Disclosure of Material Connection: I am a member of Full Moon Bites Promotions and a copy of this book was provided to me by the author. Although payment may have been received by Full Moon Bites Promotions, no payment was received by me in exchange for this review. There was no obligation to write a positive review. All opinions expressed are entirely my own and may not necessarily agree with those of the author, publisher, publicist, or readers of this review. Sweet n' Sassi is not responsible for sponsor prize shipment. This disclosure is in accordance with the Federal Trade Commission's 16 CFR, Part 255, Guides Concerning Use of Endorsements and Testimonials in Advertising.