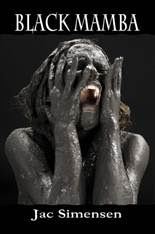 
A spellbinding, supernaturally tinged thriller that explores the dark world of commercial sex trafficking... Upon the death of her voodoo, priestess mother, Stella, a young Haitian girl inherits her mother's voodoo powers. Stella's disabled father is forced by crushing poverty to sell her into domestic slavery. Stella strides through the muck and mire of a tawdry world where the lives of innocent young women are cheap and exploitation is a daily affair. The narrative spills forth in tangential lines that leapfrog back and forth between the twisted, erotic actions of a psychotic, Cajun voodoo sorcerer and his cabal of wealthy, powerful men, and Stella's efforts to protect exploited young women, then builds to an outlandish climax reminiscent of Stanley Kubrick's 'Eyes Wide Shut.'

About the Author, Jac Simensen:

Jac Simensen was born and educated in South Jersey, but has lived outside of the United States for most of his mature life in the UK, Germany, Japan, Singapore, Hong Kong and the Middle East, where he worked with a variety of technology and intelligence enterprises. Before turning to novels, he authored dozens of technical papers and articles, wrote a technology column for an English language Japanese newspaper and was published in trade journals and the Economist. He currently lives in southwest Florida and has written four novels.

Learn more about Jac and his books on:
Website
Goodreads

Jac Simensen pens "Black Mamba" a tale of voodoo, human trafficking, sex, and child abuse. He brings his characters to life as he weaves his tale of good vs evil. A fantastic book for all who love a good thriller with their paranormal read. This book is intended for Adults 18+

I give "Black Mamba" a 5 star rating.


*Disclosure: I received the above product(s) in exchange for an honest review and in no way was I asked to give a positive review. I received no compensation for this publication. My opinions are my own and may differ from those of your own. This disclosure is in accordance with the Federal Trade Commission’s 16 CFR, Part 255, Guides Concerning the Use of Endorsements and Testimonials in Advertising.