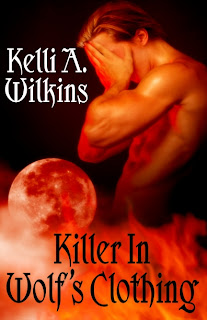 
A super aggressive Alpha male, a serial killer, and a visit to a kinky sex club…What has Larry gotten himself into?

When Larry learns that his boyfriend Greg changes into another man during the full moon, he has a hard time accepting it—until he meets Deke, Greg’s alternate Alpha personality.

Deke doesn’t play nice and has no time for games. He only wants two things—to get laid and to get revenge against the arsonist who murdered his friends. Finally free from Greg’s restraints, Deke is ready for action, and Larry is more than willing to submit to Deke’s needs.

Together, Larry and Deke set out to find the killer. Their hunt takes them to an all-night Alpha sex club where things heat up for the two of them. But when Larry unwittingly falls into the clutches of the murderer, it’s up to Deke—and Greg—to save him before it’s too late.

About the Author, Kelli Wilkins: 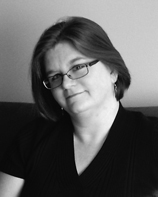 Kelli A. Wilkins developed a love of reading and writing while growing up in a small upstate New York town.  Kelli enjoys writing in different genres, and her speculative fiction has appeared in numerous publications, including The Sun, The Best of the First Line, What If? andWeird Tales.

Kelli is a member of Romance Writers of America and has published several historical/fantasy romances with Amber Quill Press.  She currently lives in New Jersey with her husband.

"Killer in Wolf's Clothing" is a quick fun read, that will hook you from the beginning. A bit different than I'm used to regarding werewolfs, but I totally enjoyed the book. Recommended for all who like the horror genre with a twist of fun.

I give "Killer in Wolf's Clothing" a 4 star rating.

Disclosure: I received the above product(s) in exchange for an honest review and in no way was I asked to give a positive review. I received no compensation for this publication. My opinions are my own and may differ from those of your own. This disclosure is in accordance with the Federal Trade Commission’s 16 CFR, Part 255, Guides Concerning the Use of Endorsements and Testimonials in Advertising.