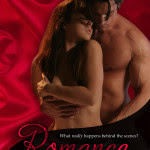 A book club, a romance novel, and a group of professional women in Atlanta, Georgia. That might bring to mind a nice enjoyable evening of companionship and fun, but what if the women in question wanted to take things just a step further than the safety of a cozy living room meeting? When Jessie's book club decided to put some real-time research into the background of their latest reading topic, she had no idea it would land her right in the middle of Sensation's Dungeon! Chase Davenport had seen dozens of women walk into his dungeon, curious about what his lifestyle entailed. Never had one ran for the door and looked on in abject horror like a certain petite little brunette. Challenge, that's what he considered when he stared into eyes the color of a Caribbean sea at sunset filled with fear. The sexy club owner fit the description of a sexy alpha male romance character to a tee, and to Jessie that wasn't a compliment. When he offered to give her a tour of his dungeon, and discuss the reality of his lifestyle, she should have ignored the temptation. But how did anyone resist a chance to talk with a man that had a body built for sin and a smile that made her knees tremble? Determined to give the tempting beauty just a little education about his world, he had no idea unlocking her mind would result in his own need to stake his claim. He was a man accustomed to having women beg for his attention, but there was something about Jessie that called out the true alpha in him. Would she be able to accept what he really wanted from her, or walk out his dungeon never to return? It began with a love of reading romance behind the pages of a book... but in the end, reality would show a different world awaited if either of them were willing to take the chance.

Michelle Hughes is an international bestselling independent author. She currently resides in Alabama with her husband and her five children. Hughes began her career in entertainment as a singer and host for a nationally televised satellite talent program and continued to perform across the United States until she decided to move home and start her family.

Hughes owns Tears of Crimson. The website began as role-play and fan fiction base and has since become the home of Tears of Crimson Books. Hughes states her love of writing comes from her muse Rafe, who has given her dreams of fantasy worlds since she was a young girl.

Hughes started reading Harlequin romance books at eight years old, sneaking them from her grandmother. It instilled in her a love of romance that is still with her today. Her grandmother was raised on a cotton farm and only completed a sixth grade education, it was through watching her struggles with reading that Hughes states gave her the love of the written word.

Pump Up Your Book and Michelle Hughes are teaming up to give you a chance to win a $25 Amazon Gift Card or Paypal Cash!

Here's how it works:

Each person will enter this giveaway by liking, following, subscribing and tweeting about this giveaway through the Rafflecopter form placed on blogs throughout the tour. This promotion will run from May 10 through May 15. The winner will be chosen randomly by Rafflecopter and announced on May 16. Each blogger who participates is eligible to enter and win. Visit each blog stop below to gain more entries as the Rafflecopter widget will be placed on each blog. If you would like to participate, email Tracee at tgleichner(at)gmail.com. What a great way to not only win this fabulous prize, but to gain followers and comments for your blog, too! Good luck everyone!

Participating Blogs:
Coming Soon!
If you would like to join this book blast, leave a comment below with email information or email Tracee directly at tgleichner (at) gmail.com.

* Disclosure of Material Connection: I am a member of Pump Up Your Book Tours. Although payment may have been received by Pump Up Your Book Tours, no payment was received by me in exchange for this publication. Sweet n' Sassi is not responsible for sponsor prize shipment. This disclosure is in accordance with the Federal Trade Commission's 16 CFR, Part 255, Guides Concerning Use of Endorsements and Testimonials in Advertising.